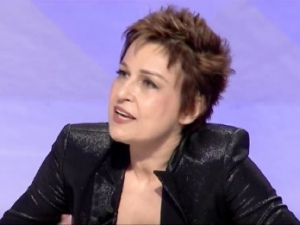 Ms. Buda is a novelist and human rights activist.

Ms. Buda looks back at a long career in journalism. Apart from RFI, she has worked for the British Broadcasting Corporation (BBC). Her BBC reports from Paris were widely praised by the public. “Klara Buda, BBC Paris,” became a household name. Before that she also worked for UNESCO.

While serving as a department director for RFI, she held multiple positions as a lecturer in radio journalism and in political discourse for the Council of Europe. She led multiple media diagnostics missions in South East Europe and designed numerous training programs on media independence, ethical journalism, and political discourse. Her work on multi-ethnic broadcast services was recognized by the Director of the Council of Europe in 2004.

In 2013, she was awarded the «Francophone Personality of the Year» by the International Organization of Francophonie for her work in facilitating cultural exchange.

Ms. Buda earned a Master’s degree in Historical & Philological Sciences and Art History from the prestigious “École Pratique des Hautes Études” (EPHE) in Paris. She studied creative writing in the USA and actually, she is a Ph. D Candidate on Philosophy and Contemporary Thinking of EGS.

She’s the founder of the online Gazette http://klarabudapost.com/ to promote journalistic ethics.