The vegetarian is a triptych, the narration is done in turn by three characters’ points of view: Yeong-hye’s husband, Yeong-hye ’s brother-in-law and Yeong-hye ’s sister. The novel reads like a parable about quiet resistance and its consequences; it’s also a questioning of Korean culture, in which conformity has a particular resonance. 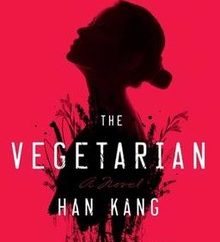 The vegetarian is a triptych, the narration is done in turn by three characters’ points of view: Yeong-hye’s husband, Yeong-hye ’s brother-in-law and Yeong-hye ’s sister.

1- Yeong-hye’s husband. He defines himself while he is describing his wife. He is a banal mediocre being. For him, the reading obsession of his wife is considered on the same level as any other obsession like for example domestic occupations.

2-Yeong-hye ’s brother-in-law, a video artist whose work has nothing special or remarkable before the work he undertakes with Yeong-hye and finally

3- Yeong-hye ’s sister, who is present in her last moments, and in a certain way is the obedient and nurturing traditional woman conforming to a traditional and patriarchal society.

Reading has brought Yeong-hye to a higher level of knowledge and consciousness about the word and society in comparison to her family. She is aware of it, this is why she always says: – “you don’t understand!”

Yeong-hys, by herself, is present only by some short intervention on italics! Her personage is described by the reaction of others toward her behavior.

Yeong-hye’s decision not to eat meat is received as an appalling rebuke by her entire family, especially her father, a Vietnam War veteran* whose violent tendencies (probably suffering from the post-traumatic war syndrome) traumatize all the family including Yeong-hye. During a family meal, orchestrated as an intervention of sorts, he attempts to shove a piece of sweet-and-sour pork down his daughter’s throat. In response, Yeong-hye slits her wrist as the entire family watches in horror. Finally, she is institutionalized.

It is a passive resistance by self-mutilation, the only existing way possible in a patriarchal traditional society.

The unconscious emerges through dreams and often by ideas associated (metonymy).

The tape “Mongolian Mark I -Flowers of night Flowers of the Day “was breathtakingly compelling!

But her brother-in-law, in the tape “Mongolian Mark II” was consumed by this image he knew, he should never attempt to capture…A progression of scenes lurching from violence to tenderness, with no extreme left unexplored…

Art gives another dimension to Yeong-hye’s existence and for a time-lapse, she felt alive again, when she said, page 97: flowers are stopping the dreams from coming back!

Writing expresses a fine sensuality of Yeong-hye’s brother – in – law: “…that body which he had spent so many hours close beside yet which he had touched only with the tip of his brush” page 100.

All of his energy was taken up in trying to cope with the excitement, the heightened awareness of living in the present moment.

Dreams, by what she sees in dreams she decided not to eat animal products and meat. That is certainly her unconsciousness, but it can be seen also as a metaphor of the resistance she makes to a traditional society (very collective or collective community in Korea) that does not take into consideration the individuals only in their relationship with the family and the community.

“The Vegetarian” reads like a parable about quiet resistance and its consequences; it’s also a questioning of Korean culture, in which conformity has a particular resonance.

*More than three hundred thousand Koreans served alongside American soldiers in that conflict.