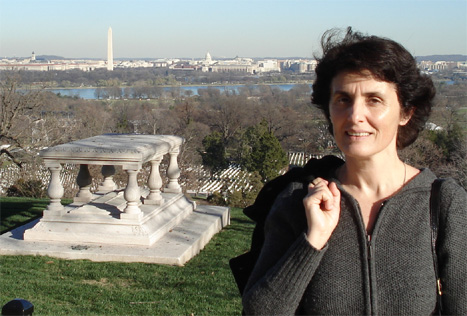 A month ago died Linda Ahsan. U trondita kur e mesova, but after the shock of this bitter news, information: "... Divided by Councillor life ..." published on a Facebook page template and reproduced by many newspapers online agency with saddened with. Official announcements - such as many had written Linda!- had no place for such a prominent idividualitet. You're still in the cult of the individual mode Albanian institutions? But let rhetorical questions for the central question of this article: Who was Linda?

Linda Ihsani eshte personaliteti, whose rrugetimi – however paradoxical it may seem that – enough alone, to make democracy radiography Albania and further, near the right wing to which Linda worked until the end.

Since the year 1990, when I left the Galleries, as many of us that were scattered around the world, I lost many friends. Por Linden, every time you go back to the foreign press, I found there, laughter, the tireless unassuming. It was always in the trend of the time, with faith and optimism for the changes that are occurring, always running and ready to help. I remember when the trio was part of a Democrat close to President (together with Z. Genc Pollo dhe Z. Fatos Bejo,) then all the horizons seemed open to a girl reading so much Linda Ihsan. Polyglots QE is not VITET 80 The, at a time, in Albania emerged from isolation of this quality was rare and therefore precious, Linda spoke Albanian as, French, English, Italian and of 89 your, when working as a guide from the National Historical Museum, the German. It comes out to the wider intellectual baggage. Together we often different perspectives about the world and often diametrically opposed opinions, but this did not change our mutual respect, because it was true and without winding, say what they thought, was the epitome of intellectual honesty.

I realized early that Linda was perfectionist and the only thing that was preferred intellectual comfort, time to read, to go further in the study. This perfeksionizem and demand to have made himself often refrain of not publicly displayed, but trying to work works as always the best. This aspiration will lead in 2006 – 2007, ne Washington University, USA.

Because of its opinion said open, from this standpoint, I thought it would be a value in each team giving him pluralistic dimension. But this skill probably will not serve generative career. A number of other friends, s e s th century MI, that were ranked in the top next to the PD that we were left in the first decade. This may not be a good omen, because all these people, Next often historical opposition Albanian party were losing faith that initiated pluralism. For me that analyzes everything from afar (France) with a distance of desired bound, This fact was an undeniable indication of "horizons" towards which was trying to go the DP. Many personalities were pulled her, By Linda jo, she continued to work side by heading to DP, jashtekohore loyalties with a kind of a Platonic dimension. Continued so, at the time with her fruitful career and for full 13 year, always with the dedication of so many at a time when the party was in opposition.

Over the years he worked for the head of the DP, I had made myself the question how often was not tempted to run a new feature, not necessarily to climb above, por diversifikuar for you and for you Qene protagonists, in a place where you can come better serving its capacity. Then for me it was incomprehensible why stay in a retracted position so, when young people and often unable to climb as catapult?

He left the DP head with no explanation and without ever publicly stated why it was removed. Something was broken inside. Mister! expressed some, for a ka vertet mister? Today it seems that the mystery is not a secret but Polishineli (Punch).

After a year in a private company will be back at the Albanian parliament. "I never asked for anything!"Only this expression of sorrow or repentance of the President of Parliament speaks volumes in both directions, for Linden and the nature of power. In connection with this latter expression is sufficient to show that the requirements are not based on merit and efficiency of government. As Linda requested but not earned and deserved since he had no reason to seek.

During 22 years that I worked in Paris, changed at every time I thought automatically Albanian Ambassador for Linden, because her trunk and excellent french it was a perfect candidate to.

I always asked why individuals with the skills and integrity as Linda not ever appointed in these positions. If this question has've made myself so many times, even when young people without any experience and sometimes without adequate training university are appointed, not Paris, becoming pregnant the Embassy of adding more work the rest of the staff.

I write these lines not for Linden, but for what it representing the: egziztence a citizen of the emancipated intellectual and moral aspects of the word, whose destiny should not exceed unnoticed, Albanian society where being gjeneralizohen, values Former thief mountains or those of a customary tradition of any area south, where if you had not stolen a dash, a di-diagnosed, not yield bride in the village ...

Unfortunately, her fate is fate merits Albanian contemporary society, you can not deny that aspires pluralism of democracy, but is delaying be freed from the power of clans, nepotism and the cult of the individual. That's why Linda Ihsan journey alone suffices, to make democracy radiography Albania and further, the right wing in power. This for the simple fact, the leaders of the DP, can not say that we did not know Linda capacity Ihsan, as can say for many other intellectual and capable as she integer, but this power is not turning promotes important positions with the state or our involvement in the world, we trophies for grandchildren and clan.

Linda Ahsan, Her life and death, metaphore are part of that intellectual discouraged, isolated dies every day under the whip of the disabled, dominantes pseudo and they form the definition, that is kill, DAILY civic values, in the name of victory that he's lying to CIRE more.

I had felt the same tears in spirit, a year ago when I learned of the departure from life Ardian Klos, consumed with the news that broke out in the country with sorrow. Adrian had followed through writings and love for Albanian approached us. Last time I met him in his house staid publishing house in the Book Fair 2009. For the, man of letters, genuine intellectual, was sitting alone in the role of seller of books to his publishing house. Even small booth where she was selling books then Klosi, with that emerged as metaphore of the fate of intellectual value in our Albania.

“Being yourself in a world that makes moths and everything possible, to be a bear ty dike tjeter, means to face the fierce battle that a human being can face; and do not ever stop fighting.” Kjo thenie e e.e.cummings, authors of the cult, the sign of modesty, typography imposed a change in its name, requesting that he be always written with a small letter fits so well Linda Ihsan. She also maintained a minimalist image, its just a picture, ketu me (below / above), say studente ne Washington University gjendej ne Internet, others are published after the death.

I conclude this requiem the values ​​that we lose, with the biggest victory of Linda, that is the biggest battle of a human existence, that of being itself at any time.

This precious part of our society, this "species" of the generative LOJIT rarely have stimulated supported, should be put in charge of affairs, as intellectual merit and support of civic morality that this will avoid the state become a state further tribes.