“Journalism has enriched my life, this profession forms you as a person. “SG 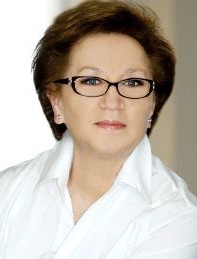 “This profession has made possible for me to know many people who have left indelible traces in my life. All my life I sketched human portraits, I raised the women figure. I have always been in defense of women’s dignity.”SG

This translation is automatically generated. Original text in Albanian. Get Involved! To help update translations please contact us!Already a translator for this site? Please Log In

Klara Buda – What represent for you the price ” Veper Kapitale ” (Lifetime Achievement Award) with which you were honored by the jury of Prishtina Book Fair 2014, and what this award represents, for you?

Sanije Gashi: During my long road in journalism, I have received several awards of gratitude for the work in this profession. But, this prize is unique compared with others, because it is a kind of stamp on my way as publicist. I am glad and proud, because in this time somewhat unclear, this price is one attributed by a professional jury, who knows how to appreciate the genuine values. In addition, it was a pleasant surprise and has special significance for me!

Klara Buda – As the first female publicist with a long career in the media of Kosovo, what is the women’s role in the Kosovo press, today?

During this time I met women who worked in the media, initially they were not a lot, but now i am glad when I see all these women employed in the Kosovo media, especially during these 15 postwar years, and many of them are successful! I am glad, also, when they deal not only of women’s issues, but all other aspects of life. I consider their role to be irreplaceable, which speaks for their level, their education, their cultures, and emancipation generally!

Klara Buda – What do you think about independent press in Kosovo in general today, knowing that you have established the first independent magazine in Kosovo, Teuta ?

Sanije Gashi: I first, started as journalist at the youth magazine “voice of youth “. And with the start of publishing the women’s magazine “Kosovarja” (in 1971), I worked for 4 years as editor, then 18 years as chief editor. During the hard time of occupation* of Kosovo, I established the first independent journal – “Teuta”, although it was really risky! “Teuta” has been published for 20 years now. I consider that the independent press has created opportunities for free expression of opinion, for the development of democracy and to overcome quickly the country’s transition. Independent media has a big importance for the development of the society.

– This profession made possible for me to know many people who have left indelible traces in my life. All my life I sketched human portraits, I raised the women figure. Actually, I have always been in defense, as support the women’s dignity. Today, the woman has affirmed her personality in all areas of life.

Journalism has enriched my life, this profession forms you as a person. Everyone must leave something special behind, to not be forgotten. Blessed is who impress with her/his work, her/his nature and her/his Humanity.