For reconciliation to happen, Serbia needs to accept Kosovo as equal

The idea of territorial exchange which has been put on the table, recently, is a very dangerous one! For reconciliation to happen, Serbia needs to accept Kosovo as an equal, as a state. The reconciliation between France and Germany would have never happened if Germany had denied its responsibility in the Second World War! This is an example that cannot be ignored! 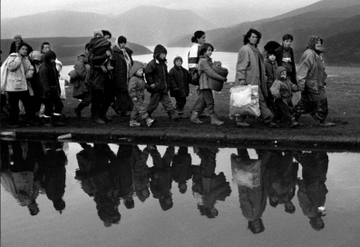 The idea of territorial exchange which has been put on the table, recently, is a very dangerous one!

Serbia knows very well that the battle with Kosovo has been lost. Militarily, they lost in 1999. Politically, in 2008. Juridically in 2009, with the ruling of the International Court of Justice, which proclaimed that the independence of Kosovo was not against international laws.

Now, it is clear, that Serbia wants to win the moral challenge, somehow by artificially trying to impose a moral parity between themselves and the rest of the countries issued of former Yugoslavia. That is simply false. There was one aggressor in the former Yugoslavia, and that aggressor was Serbia. There was one military that fought for expansion and committed genocide. The rest of the Republics– Slovenia, Croatia, Bosnia & Herzegovina, and Kosovo –were fighting for freedom and democracy. Even today, Serbia refuses to accept the historical responsibility for what happened in the former Yugoslavia.

I think that for reconciliation to happen, Serbia needs to accept Kosovo as an equal, as a state. They also need to accept historical responsibility.

The reconciliation between France and Germany would have never happened if Germany had denied its responsibility in the Second World War! This is an example that cannot be ignored!

The last time public opinion has heard of the idea of territorial exchange as a possible means of resolving conflicts was during the war in former Yugoslavia. Everyone is aware of the disaster this has caused. The conflict between Kosovo and Serbia, which has been going on for almost ten years was caused by the Serbs’ refusal to acknowledge Kosovo. The Serbian oppression led to the birth of Uçk and finished by the NATO intervention in 1999.

No one needs processes such as territorial exchanges, because they are dangerous. Having worked for years covering the wars in former Yugoslavia for the French public radio RFI, I’m aware of the risk involved with this idea. The territory exchanges promoted and put into practice by S. Milosheviç and Serbian paramilitary forces in the 1990s were inspired by an old Serbian theory. It was in the origin of all the wars in the former Yugoslavia.

If the exchange of the territories on an ethnic basis was to be an idea worth putting on the table again, a reality of the ethnic cleansing of Preshevo Bujanovç and Medvegje would also become possible and even inevitable in the case of Kosovo. Without even speaking of the « domino » effect that would happen in Bosnia & Herzegovina and abroad.

We all remember that it all began with the exchange of territories that S. Milosheviç wanted to follow with the proclamation of the independence of Slovenia, Croatia including also Bosnia-Herzegovina, one of Six republics of former Yugoslavia.

In the case of Kosovo, if the idea of a territorial land swap, underestimated by Mogherini, High Representative of the Union for Foreign Affairs and Security Policy, were to be taken up as valid in the framework of the negotiations conducted by the EU, this would lead to the expulsion of Albanians from Preshevo, Medvegje, and Bujanovc. The north of Mitrovica, Gazivode (hydro-power complex), and northern Mitrovica, and Trepca (mines) would be amputated from Kosovo. Without them, Kosovo does not have water resources and without those resources, the country cannot survive.

In addition, the arguments against a territorial exchange are well known throughout the history of the world and can be dramatic for the Serbian and Albanian populations. This matter must be taken very seriously and the politicians who promote it must know that they are taking a dangerous path and are not serving either Serbia or Kosovo, which in its constitution is defined as a multi-ethnic country and not an ethnically pure one.

This can put not only Kosovo and Serbia in a dangerous situation but can impact, through Bosnia & Herzegovina, all the Balkans.