Sanije Gashi is a writer, journalist, editor and fighter for women’s emancipation. 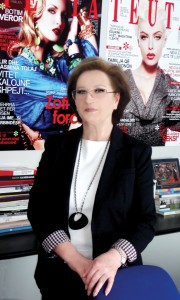 Mrs. Gashi is actually editor in chief and owner of the most qualitative, popular and appreciated women magazine in Kosovo, TEUTA.

Her book “War crime dossier, Kosovo 1998-1999” published in 2009 is one of the most serious work of facts and investigations about the Serbs atrocities in Kosovo.

After the suppression of Kosovo’s autonomous status in 1989, qualifying her articles very “hostile” and “disturbing for Serb opinion (!)” Mrs. Gashi was the first and the only woman journalist who has been arrested and in 1992 imprisoned to Mitrovica jail by the Serbian regime.

She is the first women journalist and publisher in Kosovo, who has for 49 years been actively engaged in Media.

In 1971 she founded the Magazine KOSOVARJA. During the Serbian destruction of Kosovo’s institutions, in 1994, Mrs. Gashi founded the very first independent women’s magazine in Kosovo, TEUTA.

During her professional career as editor in chief, Sanije Gashi has reached the highest selling circulation of Albanian magazine in Balkan.

Sanije Gashi lives and works in Prishtina, the capital of Kosovo.