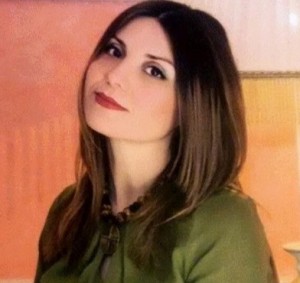 Mira Tuci is a Senior Journalist of Culture Department at the Albanian Public Television. She is known to be one of the most qualified journalist of art and culture in Albania with more than ten years of producing stories, reportage and interviews shifting from theater to literature from music to cinema. Due to the valuable contribution to the media she had the opportunity to be accredited as a journalist for the Popes Francis Visit in Albania. She also attended and pursued many regional and International movie festivals as screenwritter for the National Festival of Song in RTSH, or cultural events including here the Berlinale film Festival, National Film festival in Durres etc…
Prior to this she worked as Author of “ArTi” a TV program hosted by Digitalb – TOP Media a program that hosted prominent personalities of arts and not only Albanian ones but even stars such Duff McKagan or Italian writers. Earlier she used to be a senior journalist producing for more than four years the TV Program “Almanak” as an interviewer and moderator of many famous artists and writers like: Ismail Kadare, Michele Placido, James Belusci or directors like Giuseppe Tornatore, Kean Loach, and Paolo Sorrentino.
She started to write for the daily newspaper “KohaJone” and then for a known televisions like TVA and Alsat (Albanian Satellite Television) always as a journalist of culture. She holds a Master of Arts in European Studies at IRERIE France, a Specialized course on PR and Communication at the (Presidenza Regionaled’ Umbria) in Perugia and a degree in Journalism from University of Tirana.