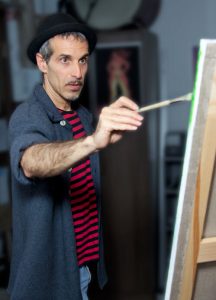 Born and raised in New York City, Eric Drooker began to slap his images on the streets as a teenager. Since then, Drooker’s reputation as a social critic has grown, and has led to countless editorial illustrations for the Nation, the New York Times, the Progressive, etc.

His first book, Flood! A Novel in Pictures won the American Book Award, followed by Blood Song, soon to be a major motion picture. His graphic novels have been translated into French, German, Italian, Korean, Portuguese, Spanish and Turkish. After designing the animation for the film Howl, he was hired by DreamWorks Animation.

His art hangs in numerous collections including the Whitney Museum of American Art, MoMA, the Brooklyn Museum, and the Library of Congress. Eric Drooker is available for select speaking engagements. He appears frequently at universities and is available for slide lectures.

Eric Drooker’s drawings and posters are a familiar sight in the global street art movement, and his paintings appear frequently on covers of the New Yorker. He is one of the most prominent Newyorker contemporary graphic artists very active on the ‘protest art’!