Ms. Buda goes on to say during the presentation of her novel that, those particular themes are important for the emancipation of the Albanian society. She believes that Albania cannot integrate with the rest of Europe if the Albanians do not abolish their taboos. Her most recurring motif is the “female-murdering” system, which attempts to “kill” the mother over and over. Therefore, the author calls her book a tribute to individual freedom and to motherhood.” 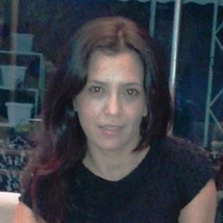 Ms. Buda, until now we have known you as a publicist and a journalist. Chloroform is your first novel. Why did this book take so long?

I have always written, but I am a perfectionist. I have never published any fiction before, but Chloroform is not my first endeavor in fiction. I have written everything from short pieces to complete novels. There are several reasons why I have never published fiction before. First, I had systematically read works from world literature, because I believe that before writing, one should have something to transmit and to write about. This is imperative, especially in the case of Albanians who lived in isolation. Because of this long isolation there are many references that we lack, particularly literary references. I went back to school to study literature and art history, then continued with my graduate research on the works of Mitrush Kuteli, an author who was not known in France except for a bad translation of The Autumn of Djeladin Bey. Furthermore, fiction requires a broad life experience, as well as periodic isolation and dedication. In 1990 I settled in France and I wanted to become a part of the country I was living in, so I chose to work and immerse myself in an environment that was foreign to me. Once I became relatively familiar with the Western world (working as a journalist in Radio France Internationale, was very helpful), I felt that I could dedicate the right level of commitment to my writing. I consider quality first in my writing; I do not want to be the kind of writer who publishes every scratch they ever put on paper. The novel in your hands is one third of the original version, which I left to sleep for a time. After I worked it again until the last version. Because there are many bad books and there is no need for another one.

Your novel Chloroform is set during the totalitarian times, a setting that has been treated in many other novels. What makes your book different from others in this genre?

Chloroform focuses on the destiny of the individual and his aspirations to freedom. The novel sheds light on the absurdity of a freedom-annihilating system. A group of students resists to this system by creating islands of freedom inside of the totalitarian “space” where they are between friends who trust each other. Those islands of freedom are the only things protecting and saving human souls from destruction. The book illustrates the incapability of any system, no matter how horrible it might be, to completely erase the idea of freedom. The novel also presents my own personal and individual perception of the totalitarian period, and therefore it is completely different from the other novels set within the same period. The moment I decided that I had something to say, something that others might find interesting too, I sat down and wrote Chloroform, which is not a political novel.

Your characters don’t discuss politics, they prefer to talk about other things, Sappho or Lesbos Island for example…

As a rule, young people rarely discuss politics. The only conversation regarding politics (but without political comments) is about the death of the prime minister. They express doubt concerning the official information of the prime minister’s suicide. That cannot be called a political debate by any means. Instead, they talk about antiquity, the classic culture and many taboo themes, such as male and female homosexuality, infanticide, and other issues in the ancient Greece. This is intentional; I would like to make the lector familiar with those themes. The only way we will integrate into the European Union is to abolish our taboos. This is the only way European people will consider Balkan people in general, and Albanians in particular, to be equal to them.

Often, there is only a thin line between truth and fiction. Is this the case in your novel?

Chloroform does not describe real events and makes no allusions to real events. For example, one of the main characters is the completely fictitious guardian of the morgue. The position of “morgue guardian” does not exist; I created it. I created a character that holds a job that never existed so that no one can identify with it.

This book stigmatizes male chauvinism. Women are killed simply to protect their morals. Are you looking to criticize the morals of the times, or are you trying to attract the reader with your approach of these taboo themes?

The morals of those times were false. I have used some approaches in the novel to illustrate the perversion of moral values. Sooner or later, all censored societies will end up generating falsity, since their people are not free to choose. All perversions hidden by propaganda come to light freely. An example is addiction. During the totalitarian regime, there were people who had experienced personal physical traumas and had developed a dependency on drugs after taking them to treat their pain. I knew addicts existed because being graduate in Veterinary Medicine I were a part of the medical system. The book does not discuss taboo themes to attract readers, even though this might be a byproduct. Chloroform has a higher purpose. The dialogues on ancient Greece demystify such taboos, and this is also the reason why I never reduced or simplified them, even when it was artistically opportune to do so.

Death is ever-present in your novel, from the first to the last page. Luiza Kodra’s murder is the most terrifying, especially because she was killed only to cover a scandal and because she was from the North of Albania. Were Northern women despised more?

Luiza Kodra is a peasant woman. In the socialist hierarchy, she is either at the same level as, or maybe a bit higher than, the Roma. She is at the bottom of the food chain. The North was poor – so poor that the city residents and the peasants in the lowlands could not fathom it. Their situation became worse since there was no infrastructure. Imagine those families that still lived in Kulla (stone houses in remote Northern areas). That is why I chose a woman from the North. I can’t say that Northern women were more despised, because totalitarianism despised all individuals without exception, but this category of people that lived at the bottom of the hierarchical ladder, both women and men, were secondhand citizens and suffered even more than the rest. The system tries to kill the mother in the book and manages it twice – it murders Luisa and stops Alma from becoming a mother. The woman has always been oppressed. Nevertheless, she always acts as a calming element, the one who negotiates and maintains peace and makes the ultimate sacrifice. Chloroform is above all a tribute to individual freedom, but also to motherhood, the most precious product of our culture. It is no coincidence that, the most famous mother in the world, Mother Teresa was also Albanian.

“The world is full of bad literature there is no need for more.” This cautious thought kept Klara Buda from publishing her work before it matured. Then the time came for Chloroform. Though Klara’s first novel is set in the rough times of a totalitarian regime, it nevertheless has no political elements in its plot. The journalist of “Radio France Internacionale” was instead interested in a completely different element; she focused on themes like homosexuality and drug addiction, which were never even hinted at during the times of false totalitarian morals.”