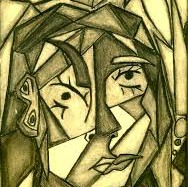 Buda seems to prefer to blend realistic and modern techniques in the introduction of her characters. The penetration to the characters’ consciousness and subconsciousness is achieved through the description of seemingly nonsensical, superficial, and unimportant acts, such as the insecurity and fear of the morgue guardian:

“The man started for the door […] but then turned in the opposite direction” [insecurity].

The novel’s characters seem empty, devoid of strong feelings and emotions. What distinguish them is their physical descriptions – descriptions of the features that express their inner dilemmas, as if these dilemmas have been etched on their bodies through a somatic process. This characterization introduces us to a character whose low moral character is represented in his vulgar and ugly appearance. Physical deformity is an allusion to spiritual deformity, hinting at the expression of the spirit through the body and vice versa.

Marenglen, also called Qani, is a person with a mutilated body and soul. Parts of his extinguished soul have survived or assimilated; thus, he is a necrophiliac. Below are descriptions from the novel that describe how Marenglen has survived violence but has not escaped completely unscathed:

“[…] who he had survived […] this was the reason why his existence dragged along lifeless fragments, and also why his vision emitted such deep wounds (pg. 21).

The hand, whose velvety nails betrayed an old typewriter, handed her a form… (pg. 10).

The movement exposed a large, hairy wrist with curly black hairs that contrasted with those old nails. Some of his features indicated youth, and others would look more appropriate on a doddering old man, making him appear like a body glued from limbs gathered here and there and everywhere in time (pg. 11).

These seemingly purely physical descriptions help the reader to discover the psyche of the character. Frequently, innocuous expressions herald a disfigurement and extremely inhuman features.

When talking to the organs preserved in formaldehyde, Marenglen, the morgue guardian, apparently talks only to his preferred features. For example:

“Good morning my arched eyebrow! Don’t you feel comfortable in my jar?”

Furthermore, the stream-of-consciousness in the following paragraph warns us of the murderous aspirations of Marenglen, even though the term “murder” is never used.

“God help her! A thin or arrow-shaped eyebrow is missing from the collection. I might never meet the moon-brow of tonight again. I wish I could draw it, preserve it in formaldehyde, and collect it. I wish people were born with check boxes. One could tick the original feature to be collected and extinguish life conveniently at the same time!

Nobody would worry about a death motive then” (pg. 28).

His obsession has transformed into perversity, and he dreams only about killing all individuals who possess the features he wants to collect. Buda deepens her irony, presenting this in a positive light through scientific and professional descriptions.

“The morgue guardian had his own way of thinking, a scientific method of evaluating things […] He was a true and thorough professional […] no different from any other pure specialists, maybe only for the following: he did not really see a big difference between humans and lab rats” (pg. 29)

The author encourages the readers to discover by themselves what Marenglen/Qani stands for, giving hints in details like his inability to see a difference between humans and lab rats. The difference between the two species, of course, is that one can do anything to rats, including on them and even put them down at will. Thus, it is easy to see that this passage alludes to the fact that Qani is a murderer and the representative of a system. Therefore, the same expression used as an epigraph makes another appearance: “…the poor animal…” This alienated and grotesque man both appears to be a poor animal and treats his peers as animals.