“The respect and acceptance of all different ethnics as part of the American nation, which is just unthinkable in the oldest European Democracies, make America such a great country.” Klara Buda 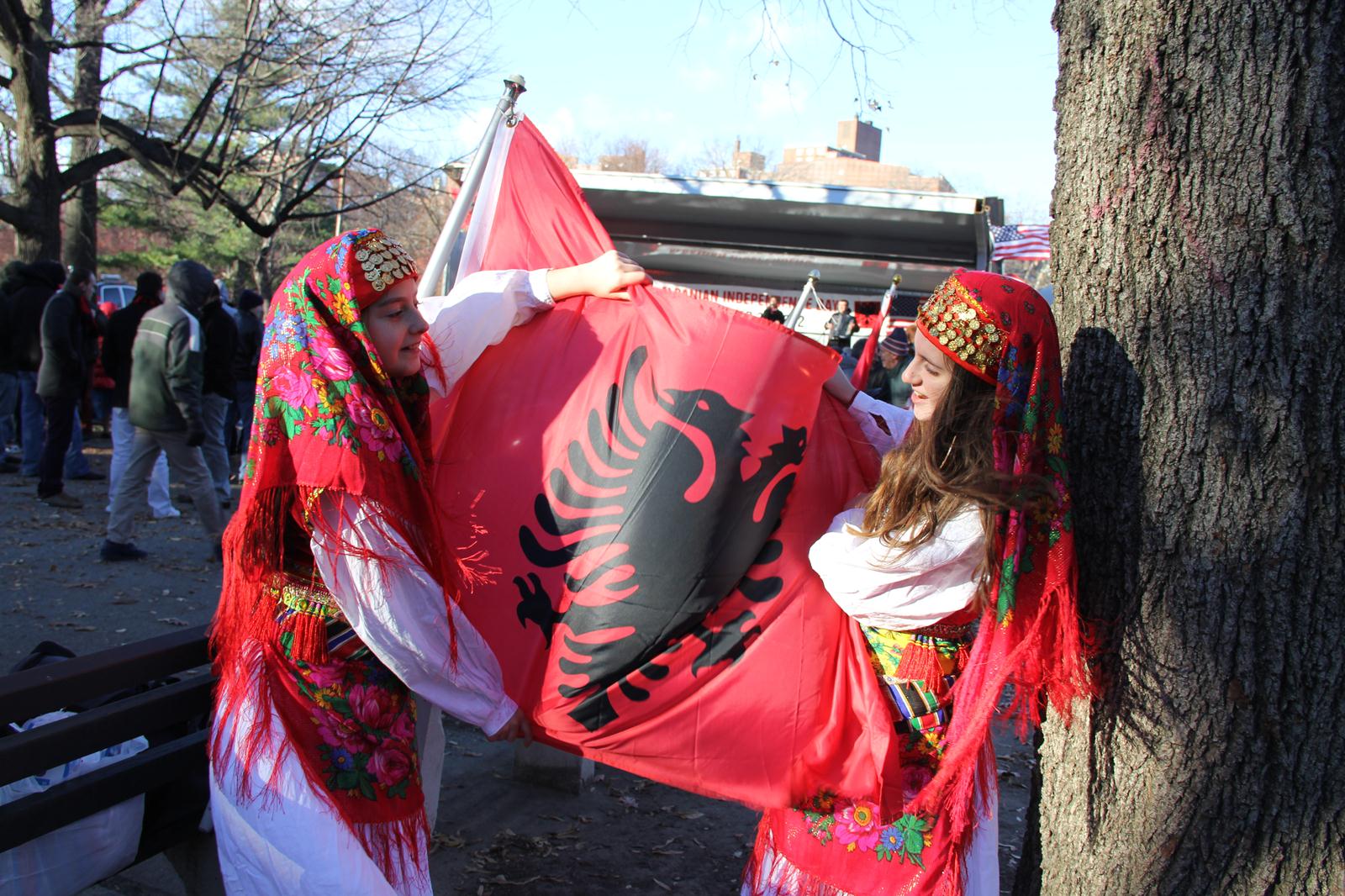 The week preceding the 101 anniversary of 28 November of 1912, the Albanian-American communities celebrated the Independence Day all over the United States as well as in New York.

Sunday November 24, in the Pelham Parkway of the Bronx, a large group of Albanian-Americans gathered from all over the New York metropolitan area to celebrate the Albanian Independence Day with a symbolic rising of their flag.  This celebration was the 5th annual organized in Pelham Parkway.  And beginning with this year, the event coincided with the election of Mark Gjonaj (D-80 th AD) the first Albanian-American in New York State Assembly.

On this day, a number of Albanian associations were present taking care of the event and distributing Black Eagle, an energy drink something very welcoming on this bitterly cold day.  And while this happens, many others are handing out invitations for the next celebration,  which ware so numbreus in New York the week preceding November 28.

As always in celebrations featuring the Albanian people, children are omnipresent, considered kings and queens of the party. The folk group “Rozafati” of “Mother Teresa Center” are struggling to stay warm in their light, totally inappropriate, summer clothing.  The world-renowned photograph and mentor of Albanian beauty, Fadil Berisha, is there surrounded by Albanians models and artists introducing Lindita, an exciting and gifted young Albanian singer.

On the corner, a bar with hot Byrek (a thin flaky pie filled with seasonal vegetables, cheese or meat) is being passed out to the eager participants.  When you want to pay, the woman handing you the Byrek annouces, « it’s free ! » delighting everyone with a hospitable spirit that the Albanian people know so well. The event was sponsored by Local 32BJ/SEIU 1199 with one of the organizers stated proudly,  “it is an important and historic day, and we did in our way.”

In his speech, Albanian American Assemblyman had a few special thoughts for his father Zef Gjonaj who passed away this summer. His speech highlighted the love and respect he has for his family, his father and for his adopted country of America. In his speech, he spoke of people: working hard, staying together, and aiding and supporting each other. But as Mark said so humbly, “it is the story of all Albanians of the Bronx, those who started from nothing and became successful.”  Some of them tell you, with a smile as if it is the most normal thing in life, that they started working when they were six years-old, as one of the brothers Kolaj. They were thoughtful taking the name “Famous Familglia” as their Pizza brand, something they feel was the key to their success.

Mr. Gjonaj thanked the Albanian community for their contribution and encouraged them to always be “in the service” of the Democracy and the prosperity of the richest, most powerful nation in the world. He also had a special appreciation for the Albanian Americans that serve as New York City police officers and firemen. “Albanian-Americans are a flourishing group of immigrants who are hard working and optimistic. They contribute to society as entrepreneurs and professionals from thriving businesses, to Albanian-Americans who bravely serve in the U.S. military doing their part to protect this great country and defend our Democracry. ”

A number of those police officers and firemen were present at the celebration and were celebrated with applause from the adoring and respectful crowd.  Capt. Flamur Cani, Commanding Officer of the NYPD was one of them, showing by his example what results when one adds discipine to the Albanian tradition.

The American Democracy: the respect and acceptance of all different ethnics as part of the American nation, which is just unthinkable in the oldest European Democracies. They have been slow to understand that emphasizing the difference of all their communities makes America a great country.

New York Congressman (D) Eliot Engel expressed his gratitude towards the Albanian community and spoke of the friendship that connects these two peoples.

Congressman Engel and NYS Senator Jeff Klein, both appreciated the commitment of Assemblyman Mark Gjonaj. ”I’m so proud of my friend Mark Gjonaj not only for being the first Albanian American person ever elected in NY State assembly, but also because he is so good, works hard and cares about all the communities. He is not afraid to get out and organize things. It is a blessing to have him in New York Assembly. I personally am very proud to have him as my friend,” said Congressman Eliot Engel.

“We are moving forward, because one of the great things that happened last year is that you elected one of our own, you have elected Mark Gjonaj. Someone, who has fought for the Pelham Park Avenue community, someone who has fought for the rights of Albanians in the United States and it is always very special when someone is elected for the first time. And I’m happy that my friend Assembly member Mark Gjonaj is the first Albanian American ever to sit in the State Legislator,” said Senator Jeff Klein who also underlined what makes America a great nation.  “This is a great day because Albanians have committed to themselves to rebuilding not only their home land but also areas in the Bronx. And this is not only the celebration of the Albanian community this is really a celebration of each and every one of us. I know that the Albanians year after years really contributed to important renaissance of the Bronx.”

The party reached its high point with the beloved voice of Merita Halili who sang the American and Albanian hymn, the modern interpretation of Lindita and the new folk creations of choreographer Angjelina Nika followed by her husband the well-known folk singer Gezim Nika. With the microphone in one hand, and the Albanian Flag in the other, he encouraged the audience to sing along with him.  The Albanian Ambassador to the United Nations, Ferit Hoxha, and the Consul General of the Kosova, Bekim Sejdiu, attended the celebration and spent a great deal of time meeting and speaking with other attendees.

Other proud members of Albanian community in attendance were :

The Albanian Americans were numerous celebrating their Independence Day, even on a very cold weather showing that they are ready, willing, and able to do great things for the community. And this day in the Bronx proves this unequivocally.