The Electoral College Was Designed to Prevent Trump. You Can Make This Happen

Real liberty is neither found in despotism or the extremes of democracy, but in moderate governments. Alexander Hamilton 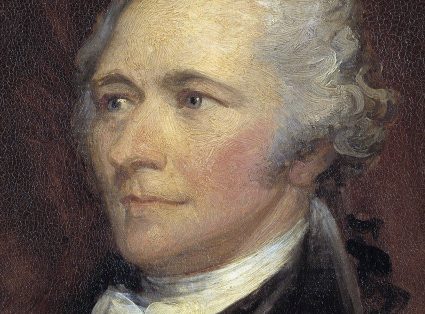 Trump can still be stopped. The Founding Fathers foresaw just this catastrophe, and built a fail-safe into the Constitution. It’s called the Electoral College. Alexander Hamilton was explicit: this mechanism was designed to ensure that “the office of president will never fall to the lot of any man who is not in an eminent degree endowed with the requisite qualifications.” In short, it was designed to prevent just this situation: the rise of an unqualified demagogue like Donald Trump.

You can make it do what it was meant to do.

The requirement here is modest: a small group of Republican electors must be persuaded to vote their conscience. No question that many of these are appalled at the prospect of a Trump presidency; surely a few are courageous enough to cast a vote for someone else. (Most if not all would vote for another Republican, of course; it doesn’t seem likely that many would choose Hillary Clinton.) Depending upon how current recounts turn out, somewhere between a minimum of ten and a maximum of thirty-seven electors would have to defect in order to bring Trump’s count down to less than 270.

If neither party ends up with 270 votes, then the decision passes to the House of Representatives, and a vote in that chamber determines the winner. The House is permitted to choose from among the three candidates who receive the most votes in the Electoral College. Hence, dissenting electors can rest assured that they — and the voters they represent — will end up with a Republican president.

Although 24 states seek to prohibit faithless electors by a variety of methods, including pledges and the threat of fines or criminal action, most constitutional scholars believe that once electors have been chosen, they remain constitutionally free agents, able to vote for any candidate who meets the requirements for President and Vice President.

These so-called “faithless electors” are vanishingly rare, which is as it should be — this is a unique circumstance, which requires emergency measures. Ignore the epithet: these electors would not be remotely faithless; this act would be faithful to the letter and intent of the Constitution. It would be patriotic.

A crucial fact here is that votes in the Electoral College are cast anonymously. An elector need not reveal that he or she is the one who chose to support another candidate. This shields an individual from retribution.

Why should Democrats fight for this? Because any conceivable choice on the part of the Electoral College and the House, however extreme, would be preferable to Trump.

This would not be an abuse of the Constitution. Quite the opposite, as I say: it would be the proper use of the Constitution to prevent the abuse of a general election. The Founding Fathers would have approved. More: they would have been distressed to see this not happen, given the circumstances. They chose to found a republic that was not a direct democracy, and this is why: a simple binding majority vote provides no check upon the election of a tyrant. (This election was an exception, ironically: Hillary Clinton won the popular vote, and direct democracy would have spared the world the terrifying promise of a Trump presidency.)

If you honor the Founding Fathers — and the Constitution — then you will insist upon employing the emergency measures coded into the very definition of the republic.

So, how do you accomplish this? The process is simple: write to Republican electors in states that went red, and beg them to vote their conscience. You can download a template for a short petition — a joint letter from you and your colleagues — on this site. The complete list of relevant electors can be found here, with contact information: United States presidential electors, 2016.

I’m urging everyone to do this: not simply Democrats, but responsible Republicans. Modern history has witnessed few events more admirable than bipartisan efforts to thwart racist demagoguery: most recently in France, when decent people on the left and the right combined — despite their mutual loathing — to prevent the election of Marine Le Pen.

So, embrace decency. It’s not just a civic duty; it’s a moral duty. It is a categorical imperative.

Once you have written letters, the next step is to agitate loudly for just this solution. The nation must see rallies, marches, blogs and editorials. Let these electors know that you’re on their side, that you will support them in what would be unquestionably a courageous act. An act of heroism. Even though votes are cast anonymously, electors will likely be threatened and slandered as a group. But patriots have withstood worse.

Trump supporters will scream; there will likely be violence, and perhaps riots. But these people did not write the Constitution; they do not get to rewrite it; and they are bound by it. It will not be civil war. Genuine Trump supporters are a minority within a minority; they will be opposed by genuine Republicans, as well as Libertarians, Democrats, and Greens. They will lose.

Occupy the Constitution. The alternative is unthinkable.