Piotr’s self-immolation outside the Palace of Culture and Science in Warsaw should prompt a period of soul-searching in Poland. Regardless of whether the man was driven by mental illness, deep political despair, or some other cause, his message to the Polish people deserves a proper airing. 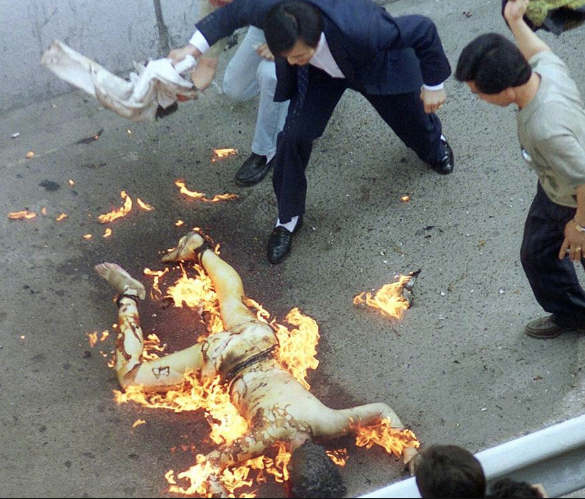 Piotr’s self-immolation outside the Palace of Culture and Science in Warsaw should prompt a period of soul-searching in Poland. Regardless of whether the man was driven by mental illness, deep political despair, or some other cause, his message to the Polish people deserves a proper airing.

WARSAW – Late in the afternoon on October 19, a 54-year-old man outside the Palace of Culture and Science in Warsaw distributed several dozen copies of a letter addressed to the Polish people. Then he set himself on fire – a protest and sacrifice that called to mind the protests of Buddhist monks against the Vietnam War a half-century ago, and that of the Czech student Jan Palach against the Soviet crushing of the Prague Spring in 1969.

The text of the letter that was left behind is eminently rational. It carefully enumerates and decries actions taken by Poland’s government that, according to Polish and international courts alike, amount to an attack on the rule of law and liberal democracy.

The letter accuses the government, controlled by the Law and Justice (PiS) party, of restricting civil liberties and undermining the judiciary. Specifically, it condemns the PiS for its discrimination against immigrants, women, LGBT people, Muslims, and others, and for destroying the environment, by supporting coal-based energy, hunting, and logging in Białowieża Forest.

More broadly, the letter also denounces “the people holding the country’s highest offices” for abdicating government decision-making to PiS Chairman Jarosław Kaczyński, who holds no public office; and for converting public television and radio stations into PiS “propaganda organs.” And it laments that the PiS government has made Poland an “object of ridicule” on the world stage.

One of the man’s goals in immolating himself, according to the letter, was to force “the chairman of PiS and the entire PiS nomenklatura to recognize that my death is their direct responsibility, and that they have my blood on their hands.” The man hoped that his act of protest would influence PiS supporters – 47% of the population, according to the latest polls – who should not want their favored policies to be enacted in ways that undermine democracy and the rule of law.

But the letter also implores the party’s opponents – 16% of Poles support the largest opposition party – “to remember that PiS voters are our mothers, brothers, neighbors, friends, and colleagues.” As such, they should not be vilified, but rather reminded of “the rules of democracy.” The letter concludes by calling on all Poles to “wake up” and change their government before it causes irreparable damage to the country.

So far, all we know about the letter writer is that his first name is Piotr, and that he is currently in critical condition, with burns covering 60% of his body. But, despite his anonymity, his ideas are resonating through Poland.

In a separate letter to the media, Piotr warned that the PiS would attempt to minimize his act of protest. “Their first point of attack,” he predicted, would be to point out that he suffers from depression. “I am what you could call a mentally ill person,” he wrote. “But there are millions like me in Poland, and somehow they manage to function more or less normally.” Piotr’s plea is clear: please do not confuse depression with insanity.

But Piotr’s act should not be made a spectacle in Poland’s political fight, or wielded haphazardly as a blunt object against the PiS or anyone else. As the World Health Organization states in its guidelines for journalists covering suicides, “Suicide should not be reported as unexplainable or in a simplistic way.” Moreover, suicide victims should not be glorified as “martyrs and objects of public adulation,” lest other “susceptible persons” come to think “that their society honors suicidal behavior.” After an act of despair such as what Poland witnessed this month, the first priority should be to mourn the victim. The second should be to channel the despair that many are feeling in ways that nurture hope.

This article is published with the permission of PS, please read the entire article at