Pierrot le Fou is the most romantic and romanesque of Godard’s movies. More exactly: the one that most wants to be. Between praise and fracture, enthusiasm and derision, Godard balances, but it is the lyricism – melancholy – that wins out. (…) Belmondo’s howl of despair – the most viscerally tragic handful of seconds of his career? As painful as, in real life, Karina’s separation from her Pygmalion… 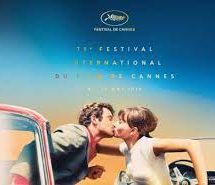 One of the cult films of the “nouvelle vague” (new wave).

Ferdinand Griffon is unhappily married and has been recently fired from his job at a TV broadcasting company. After attending a mindless party full of shallow discussions in Paris, he feels a need to escape and decides to run away with ex-girlfriend Marianne Renoir, leaving his wife and children and bourgeois lifestyle. Following Marianne into her apartment and finding a corpse, Ferdinand soon discovers that Marianne is being chased by OAS gangsters, two of whom they barely escape. Marianne and Ferdinand, whom she calls Pierrot – an unwelcome nickname meaning “sad clown” – go on a crime spree from Paris to the Mediterranean Sea in the dead man’s car. They lead an unorthodox life, always on the run, pursued by the police and by the OAS gangsters. When they settle down in the French Riviera after burning the dead man’s car (which had been full of money, unbeknownst to Marianne) and sinking a second car into the Mediterranean Sea, their relationship becomes strained. Ferdinand reads books, philosophizes, and writes a diary. They spend a few days on a desert island.

A dwarf, who is one of the gangsters, kidnaps Marianne. She kills him with a pair of scissors. Ferdinand finds him murdered and is caught and bludgeoned by two of his accomplices, who waterboard him to make him reveal Marianne’s whereabouts. Marianne escapes, and she and Ferdinand are separated. He settles in Toulon while she searches for him everywhere until she finds him. After their eventual reunion, Marianne uses Ferdinand to get a suitcase full of money before running away with her real boyfriend, Fred, to whom she had previously referred as her brother. Ferdinand shoots Marianne and Fred, then paints his face blue and decides to blow himself up by tying sticks of red and yellow dynamite to his head. He regrets this at the last second and tries to extinguish the fuse, but he fails and is blown up.

“Loneliness, tiredness, failure, betrayal, grief, intermittence of the heart, suicide. The background is dreary. The form, on the other hand, is hungry, a Promethean bulimia of art and signs. Comics, American novels, black series, symphonic music, twist, ditties, Spanish painting, pop art, Lettrism, architecture, poetry, fashion, advertising: fifty years after Picabia and twenty years before sampling, Godard practises accumulation, short-circuiting, collage, recycling, like no one else in the cinema. He is young, madly in love with Anna’s hips, he is still in a state of flux, he rushes towards the absolute, borrows, gives a lot. Technicolor, the Côte d’Azur, action, love, hate, you name it. The cinema? Emotion.” Samuel Fuller
“Godard acts as if, and from this imitation comes his becoming. Pierrot le Fou is the most romantic and romantic of his movies. More exactly: the one that most wants to be. Between praise and fracture, enthusiasm and derision, Godard balances, but it is the lyricism – melancholy – that wins out. Because art serves to enthrall the desert of life, Ferdinand and Marianne imagine themselves as characters – she persists in calling him Pierrot -, play at loving each other, really love each other, get bored, lose sight of each other and find each other again, alas, too late. Belmondo’s howl of despair – the most viscerally tragic handful of seconds of his career? – hurts. As painful as, in real life, Karina’s separation from her Pygmalion.” Jacques Morice