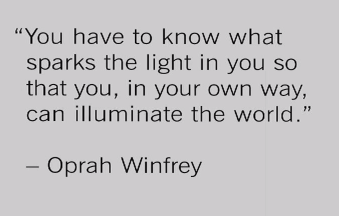 Before Winfrey’s compassionate personality brought her fame, it would often emerge at the most inconvenient of times. As a reporter, she brought blankets to the fire victims she covered on the nightly news, only to be admonished by her supervisors for doing so. She knew then, that being a hard-nosed reporter was not her calling, but she did not know what was. “Knowing what you don’t want to do is the best possible place to be if you don’t know what to do, because knowing what you don’t want to do leads you to figure out what it is you really want,” the 60-year-old Winfrey says.

Sometimes the seminal moments along the journey to the right career look much like failure. Winfrey’s path to talk-show diva came only after she was “demoted” from a television news anchor in Baltimore to work on a talk show at the TV station. “They wanted to fire me,” she says. A contract saved her job but not her prestigious anchor slot. “The moment I sat on the talk show interviewing the Carvel Ice Cream man and his multiple flavors, I knew that I had found a home for myself.”

“I always understood there really was no difference between me and the audience,” she says. “At times, I have had better shoes. But at the core — at the core of what really matters — we were the same. I mean, the secret of that show for 25 years is that people could see themselves in me.”

Winfrey says she was naive when she first started giving away some of her wealth, because she invested in well-intentioned but ineffective programs. Before you can help people, you have to help them change the way they see themselves. “If you can’t connect to that, then you lose and they lose.”