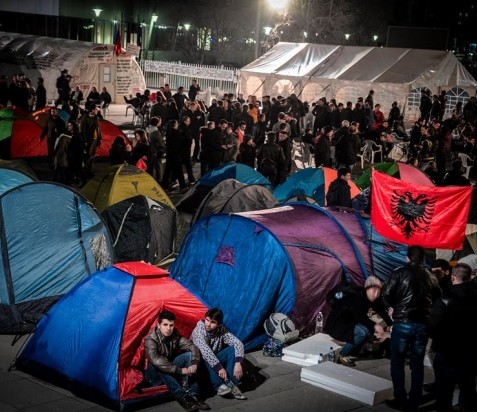 Heads of opposition parties have come out today at a press conference in front of the National Theater in Prishtina, where they announced the commence of a protest, different from the previous ones.

Opposition parties AAK, Vetevendosje and Nisma announced that as of today the protests would be held day and night in front of the Government HQ and Parliament in Prishtina.

Ramush Haradinaj, Fatmir Limaj and Visar Ymeri said that as of today a new era will begin adding that they will be staying there until the overthrow of Government.

After leaving Jahjaga’s office, at February 8, 2016 Haradinaj said he had demanded the dissolution of the Assembly and early elections. He also reiterated opposition’s request for direct election of the president. He said the opposition is more united than ever: ‘We are giving our contribution to end this sitaution” he said.