The challenges we face as a country are real. But there’s no telling what we can achieve if we approach the fights ahead with the passion and determination we feel today, and carry that energy into 2017, 2018, 2020, and beyond. 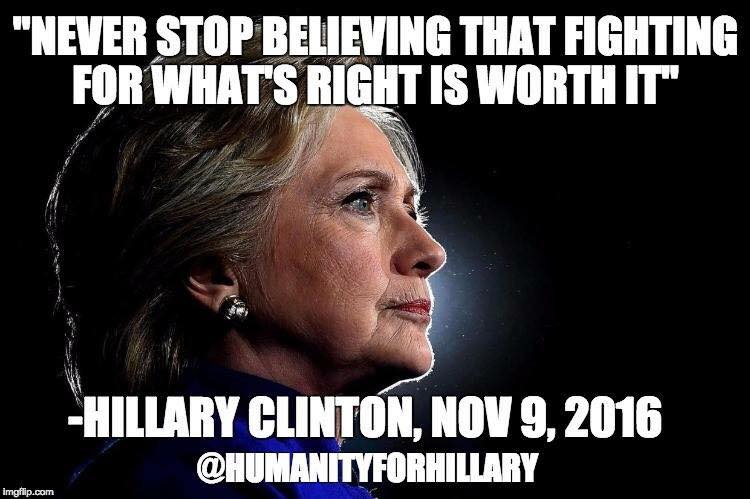 Over the last few months, we’ve seen something remarkable:

From the Women’s March to airports across the country where communities are welcoming immigrants and refugees to town hall meetings in every community, Americans are speaking out like never before.

I believe more fiercely than ever that citizen engagement at every level is central to a strong and vibrant democracy.

To support this wave of grassroots organizing, we’re launching Onward Together, an organization dedicated to advancing the progressive vision that earned nearly 66 million votes in the last election. Onward Together will work to build a brighter future for generations to come by supporting groups that encourage people to organize and run for office. I’m so grateful to everyone who has reached out to say that you’re still fighting for the values we share. Will you add your name to let me know you’re with us?

Since November, I’ve been doing my fair share of reflecting, spending time with friends and family — and yes, going for long walks in the woods.

I’ve been particularly inspired by everyone who has stepped up to lead in this crucial moment for our country, and so I’m proud to announce Onward Together is beginning by supporting five groups leading the way.

At Swing Left, experts from the tech, media, finance, nonprofit, and arts industries are working to take back the House in 2018 by mobilizing volunteers in swing districts, where votes will count the most. The team at Emerge America has doubled down on finding, inspiring, and training their most diverse slate of Democratic women yet to run for office and start to close the political ambition gap. With more than one million members, Color Of Change leads national accountability campaigns to fight for criminal justice reform, voter freedom, fairness and accuracy in the media, and other critical issues of racial justice. Hundreds of thousands of people have made their voices heard thanks to Indivisible, an effort led by former Congressional staffers who are using their expertise to help ordinary people reach their members of Congress. And since two former campaigners announced the creation of Run for Something on Inauguration Day, more than 9,000 young people have signed up to run for local office to make real change in their own communities.

In some cases, we’ll provide direct funding to these organizations. For others, we’ll help amplify their work and do what we can to help them continue to grow their audiences and expand their reach.

If you’re committed to standing up for a fairer, more inclusive America, add your name to join us right now. We’ll be in touch about how you can support these groups and more like them. There’s no time to waste.

The challenges we face as a country are real. But there’s no telling what we can achieve if we approach the fights ahead with the passion and determination we feel today, and carry that energy into 2017, 2018, 2020, and beyond.

If you’d like to spread the word, you can use the hashtag #Onward — and make sure to include a link to onwardtogether.org