New York primary: Why it matters and how it works 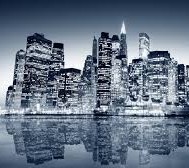 Voters go to the polls April 19 in what is probably New York’s most significant presidential primary since 1988.

That’s because the races on both sides of the aisle are still up for grabs, and because two New York residents and a native New Yorker are on the ballot:

Donald Trump: Republican primary leader Donald Trump, who owns or operates five properties in Westchester County, is from Queens and lives in Manhattan.

The race has sparked new interest in the presidential race, including from young, first-time Democrats drawn to Sanders, and rank-and-file Republicans who have rallied behind Trump’s promise to “make American great again.”

Unfortunately, if you want to jump into the fray, most of the deadlines to vote in the primary have passed. The date for new voters to sign up was March 25. However, registered voters who won’t be home on primary day still have time to apply for absentee ballots.

April 18: Deadline to mail in your ballot. Also the deadline to apply in person for an absentee ballot, and the ballot can be submitted in person on primary day, according to state election officials.

Oct. 14: Deadline to register for the general election.

Also this year, New York Republicans have adopted a new system for selecting delegates. There will be 95 Republican delegates awarded.

There are three delegates for each congressional district, for a total of 81 statewide. They will be awarded based on the votes cast by registered Republicans.

A third-place candidate would receive no delegates.

While the Republican party does not have superdelegates, as the Democratic Party does, there are an additional 14 at-large delegates who are controlled by the state and national parties.

There are 291 Democratic delegates up for grab in New York. Of those, 247 will be awarded based on the votes cast by registered party members in the state’s 27 congressional districts.

Each congressional district has between five and seven delegates, with a total of 163 awarded based on each district’s vote count. An additional 84 are pledged delegates, including delegates to the national party convention, who are awarded to the winner of the statewide primary.

New York’s remaining 44 delegates are unpledged “superdelegates.” Of those, 21 are awarded by the Democratic National Committee; 20 are controlled by members of congress; two are controlled by “distinguished party leaders;” and one by the governor.​

Each of the local congressional districts have six Democratic delegates.