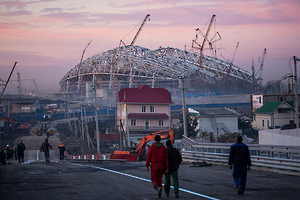 When Asha departed her native Nepal to take a job as a domestic worker in Dubai, she was excited at the prospect of saving money to support herself and her family. Once established in the United Arab Emirates, however, she found herself earning a fraction of what she had been promised. She discovered her low wages were due in part to the fact that the recruitment agency that had facilitated her employment was siphoning off more than a third of her monthly salary.

With financial help from one of her brothers, Asha was able to return to Nepal after more than a year in the UAE. And eventually she did receive a portion of the fee she had paid the recruitment agency to place her abroad. But that was only because she personally confronted the recruiter who had misled her. Accessing justice through more formal channels, whether in Nepal or in the UAE, hadn’t seemed a viable option.

As a study just published by the Open Society Foundations and the Centre for the Study of Labour and Mobility in Kathmandu, Nepal, documents, Asha’s hunch that any measure of redress she obtained would have to come through informal channels is rooted in an unfortunate reality.

While Nepal has relatively robust laws governing migration, the implementation and enforcement of those protections is weak to nonexistent. With funding from the Open Society International Migration Initiative, a team of researchers conducted a two-year investigation into the mechanisms for redress that exist for migrants who have encountered exploitation before, during, or after working abroad.

The findings were sobering. Of the 43 migrants interviewed who worked in the Gulf, 30 were thrust into conditions different from what was promised to them. Not one was able to access the legal system for restitution, either while they were working in one of the Gulf states or back home in Nepal.

Media attention has focused on the obligation of governments in destination countries to protect migrants’ rights. In one sense, this is warranted: exploitation is rife and there is much more these states can and should do to ensure that men and women working within their borders are treated humanely. But the conditions for abuse are often set during the recruitment phase, in workers’ countries of origin. Governments in countries of origin also need to shoulder responsibility, and provide better oversight of the agencies placing workers abroad.

Exploitative practices are widespread in the recruitment industry. Many recruitment agents lie about remuneration migrants can expect and workers end up being underpaid. It is also commonplace for agents to charge excessive recruitment fees—sometimes thousands of dollars—which many migrants must take out loans to pay. The exorbitant fees and loans with high interest rates, coupled with lower-than-promised salaries, create the circumstances for debt bondage.

While the on-the-ground reality is sobering, the situation is far from hopeless in Nepal. For one thing, there are laws on the books that could provide much-needed protections. A potentially effective tool for combating labor exploitation can be found in the Foreign Employment Act of 2007, which—if put into practice—could help ensure that migrants are not deceived about the conditions they encounter abroad. In particular, the Act requires agencies to submit a contract between the worker and agency and another between the worker and employer. This would allow departing migrants to see if what they have been promised squares with what has in fact been arranged. So far, however, this safeguard exists only on paper: In dozens of interviews conducted by the authors of the report, they did not find a single instance in which a contract had been exchanged between agency representatives and workers.

Another way the Nepali government could protect migrant workers is by more proactively advocating on behalf of its citizens who have been exploited in destination countries. There has been some progress in this vein: Nepal now has embassies in most Gulf states and many are staffed with labor attachés. However, when workers encounter problems in employment, embassy assistance appears heavily weighted toward arranging replacement travel documents and returning workers back to Nepal, rather than helping them obtain redress for the harms suffered. Advising migrant workers about their legal rights and supporting them in navigating judicial systems to bring cases against exploitative employers would do more than help individuals access a measure of due process. It would also help push for reform in a more systemic sense.

It is critically important for the Nepali government to safeguard the well-being of its citizens working abroad. For one thing, a staggering number of Nepalis relocate for work: Almost half of all households have at least one family member who is currently working or has previously worked abroad according to astudy by the World Bank. The remittances these men and women send home account for approximately one-quarter of Nepal’s GDP. Their labor, in other words, plays a huge role in making their home economy work.

The Nepali government has adopted laws that could help protect migrant workers. It is time for them to put those provisions into practice, and regulate a recruitment industry that all-too-often doubles as a system of exploitation.