After Their Meeting at July 26, 2014 at U.S. Ambassador’s Residence, Paris, France 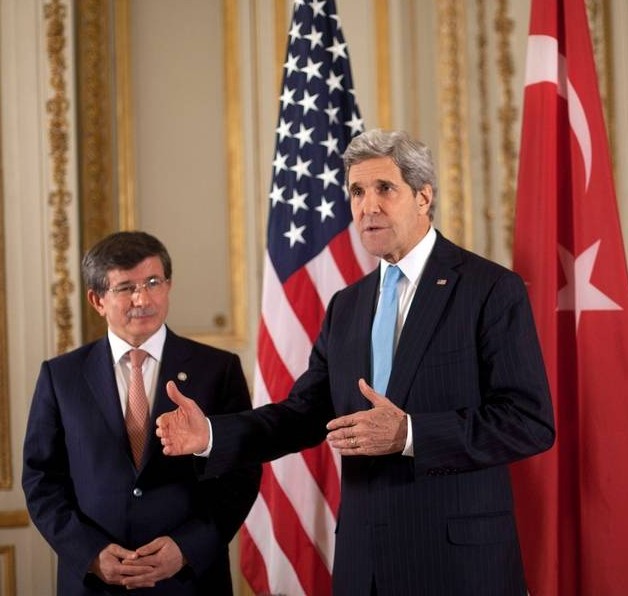 Office of the Spokesperson

SECRETARY KERRY:  I’m delighted to have a chance to be able to welcome my colleagues, the Foreign Minister of Turkey Ahmet Davutoglu and Foreign Minister of Qatar Khalid Attiyah, here to the American Embassy in Paris.  And I’m going to say a couple of words about what we’ve been working on with respect to the situation in Gaza in a moment.

But first, I want to try to clarify something and announce, to some degree, for people who haven’t heard, news regarding our situation in Libya.  The United States, together with other countries – one of them Turkey – have decided that because of the free-wheeling militia violence that is taking place in Tripoli, and particularly in our case around – a lot of the violence is around our embassy but not on the embassy.  But nevertheless is presents a very real risk to our personnel.  So we are suspending our current diplomatic activities at the embassy – not closing the embassy, but suspending the activities.  And we have moved people on ground to Tunisia where they will then disperse to other places where we will continue our diplomatic activities in Libya.

We are deeply committed and remain committed to the diplomatic process in Libya.  Our envoy will continue to be engaged with the British envoy and other envoys.  And we will continue to try to build out of the election the legitimacy of the government formation and the efforts to end the violence.  We call on all Libyans to engage in the political process and to come together in order to avoid the violence.

So many people died and gave so much effort to the birth of the new Libya, and we’re very, very hopeful that together all those people will recognize that the current course of violence will only bring chaos and possibly longer term difficulties.  We will return the moment the security situation permits us to do so, but given the situation, as with Turkey – I think they moved some 700 people or so out – we want to take every precaution to protect our folks.

Now I want to express my appreciation for the enormous amount of work that both Foreign Minister Attiyah, Foreign Minister Davutolgu engaged in the last days to help bring about the short-term ceasefire that we all hope is going to be extended into a longer term ceasefire where people can get together and work on the way forward for a sustainable ceasefire, a longer-term effort to work out the difficult issues between the state of Israel and the Palestinian factions.

We’re very hopeful that that can happen, but I will tell you the progress that we’ve made was significantly contributed to by many people, and we’re grateful obviously for the Egyptian initiative, for the Israeli efforts initially, but also this particular effort now has been significantly assisted by the input of Qatar, the input of Turkey, and the willingness of these foreign ministers to work hard even though they were at a distance, and to engage directly with some of the Palestinian factions in order to try to help get us where we are today.  They’re both committed to trying to work to continue further, and we very much appreciate that.

If you want to say something, Ahmet.

FOREIGN MINISTER DAVUTOGLU:  Thank you, John.  It’s a great pleasure to meet again, but this time we are meeting for a very tragic development in Gaza.  The humanitarian situation in Gaza is terrible.  I want to extend condolences to all those who lost their lives in this crisis and especially in these holidays approaching – Ramadan, Eid.  We intensified our efforts to agree on a ceasefire; in less than 10 days all of our teams have working last two – three days.  We worked in close contact with the – with Secretary Kerry and my dear colleague, Minister Attiyah.  As a team, we worked together.  Yesterday we had several telephone conversations, consultations, and today we are continuing here.

We wish to have a sustainable ceasefire, which we approached very closely until last month.  Unfortunately, it was rejected by Israeli side – but still we are working very hard to reach the (inaudible), hopefully with the great effort – we all appreciate Secretary Kerry’s effort.

Now we have a short-term ceasefire, which is really a success of his effort, and supported by all of us.  And I want to assure all the parties and, of course, both of our colleagues, allies, that Turkey will be working very hard to stop this bloodshed on the ground, to reach a sustainable ceasefire, and at the end of these efforts, to have two-state solution, which is the real solution for all these disasters and bloodshed.

Again, I want to express my thanks to my dear colleagues, Secretary Kerry and Minister Attiyah, for this joint cooperation and all those who contributed to this process, to this short-term ceasefire.  And as a team, we will continue to work – Egyptian – Egypt, Turkey, Qatar, United States, and Israel and Palestinian groups – (inaudible) and Hamas, all of us split – Palestinian Administration – at the end of the day, our goal is to achieve sustainable ceasefire as early as possible.

SECRETARY KERRY:  Thank you.  You have any —

FOREIGN MINISTER AL-ATTIYAH:  And I’d like again also to thank John and Dr. Ahmet for the effort of the past days to come to such agreement on humanitarian ceasefire.  As from now, I won’t add more of what John and Dr. Ahmet says.  For now, we will be working hardly to come to a point where we have ceasefire and the lift of blockade.  The tragic situation of – was I think deserve now to have a free movement of goods, a free movement of trade, that they deserve now to have their own port – their sea port, so they can trade in and out, even though if it’s under the international supervision.  But I think the time now comes that we have to have long-term solution for the people of Gaza.  They’ve been suffering for a long time, and with the help of Secretary Kerry and Brother Ahmet and all the other international player who their input will be positive on this.  I’m sure you will come to a stage where we can get a ceasefire and a lift of blockade in Gaza.  Thank you.

SECRETARY KERRY:  So before we end, I want to just pick up on a couple of themes expressed by both the foreign ministers and on what I said last night.  And I want anybody who cares about the Palestinian side of these issues to listen, and I want everybody in Israel to understand:  we clearly understand – I understand that Palestinians need to live with dignity, with some – freedom, with goods that can come in and out, and they need a life that is free from the current restraints that they feel on a daily basis, and obviously free from violence.  But at the same time, Israelis need to live free from rockets and from tunnels that threaten them, and every conversation we’ve had embraces a discussion about these competing interests that are real for both.  And so we need to have a solution that works at this.

I understand that Israel can’t have a ceasefire in which they are not able to – that somehow the tunnels are never going to be dealt with.  The tunnels have to be dealt with.  We understand that; we’re working at that.  By the same token, the Palestinians can’t have a ceasefire in which they think the status quo is going to stay and they’re not going to have the ability to be able to begin to live and breathe more freely and move within the crossings and begin to have goods and services that come in from outside.  These are important considerations.  Each side has powerful feelings about the history and why they are where they are.  And what we’re going to work at is how do we break through that so that the needs are met and we have an ability to provide security for Israel and a future – economic and social and otherwise development for the Palestinians.  That’s what this is about.

Thank you all very much.

QUESTION:  (Inaudible.)  Secretary Kerry, are you going back to (inaudible)?