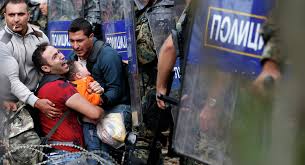 Beaten, Insulted at Border and in Detention

Human Rights Watch interviewed 64 asylum seekers and migrants, including 7 children, in various locations in Serbia and Macedonia. Seven of the interviews were conducted by phone. Many of those interviewed, including three children, had experienced abuse at the hands of Macedonian police, particularly at the border with Greece and in Gazi Baba. People described being beaten with police batons, punched, kicked, and verbally abused when police apprehended them. In some cases, migrants and asylum seekers were forced to run a gantlet between rows of police officers, who struck them with police batons on their backs, shoulders, and heads.

Ayesha, a 16-year-old girl from Afghanistan, said that Macedonian police hit her and that she twice saw police beat her father and 17-year-old brother. The first time, in early January, Ayesha said the family had gone to a police station near the border with Greece to ask for asylum. Instead, police took them back to the border and ordered them to leave the country. Ayesha’s father protested.