Kosovo Election and the condition ”fight against corruption”

“VETËVENDOSJE nevertheless refuse to join the coalition, by posing as condition “an effective fight against corruption, stopping unconditional negotiations with Belgrade and the interruption of the privatization of KEK, of Trepça mines and PTK “.” 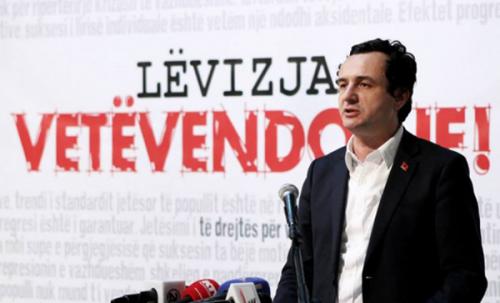 According to preliminary results, it is the Democratic Party of Kosovo (PDK) which leads with 31,21% of votes. The Democratic League of Kosovo (LDK) ranks second in collecting having 26,13%, then come the movement Vetëvendosje, with 13,61%, the Alliance for the Future of Kosovo (AAK) with 9,65% and the Initiative for Kosovo (Nisma për Kosovën), with 5,36%.

This translation is automatically generated. Original text in Albanian. Get Involved! To help update translations please contact us!Already a translator for this site? Please Log In

Nevertheless is the opposition group who are eager to create a new majority axis, under the leadership of VETËVENDOSJE, which raises the pressure on the opposition, calling on all other parties not to ally with the PDK, VETËVENDOSJE nevertheless refuse to join the coalition, by posing as condition “an effective fight against corruption, stopping unconditional negotiations with Belgrade and the interruption of the privatization of KEK, of Trepça mines and PTK “.

“Our joint objective was not to allow a new Thaçi government. It would be a continuation of the agony in terms of the economy, the rule of law and European integration “, commented Ramush Haradinaj promising an uncompromising struggle against corruption.

The PDK has responded by arguing that the action of the opposition parties was unconstitutional and affirming that it is the party that won elections to form the government. “The will of the people can not be changed by anti-constitutional arrangements. The government will be led by the PDK or it will convene early elections”, affirmé Hajredin Kuçi, Vice President of PDK.

In case Self-Determination! Does not agree to the LDK, AAK and the Initiative for Kosovo, the creation of the government depend on the minority votes. “We have a parliamentary majority, at least with the AAK; and it is up to us to form the government. If the President Atifete Jahjaga offers first Hashim Thaci to form the government, it is our chance, according to the Constitution, to have the second opportunity. But if they want to politicize this issue, we will go to early elections in coalition and our victory is assured. There is no turning back “, was the answer of Isa Mustafa.

While the Electoral Commission has not yet certified the final results, political debate is moved on the legal and constitutional level, while Western ambassadors influential in Pristina have still not commented on the latest developments.