More than 100 Harvard Medical School students, joined by faculty and staff, took part in a nationwide medical student “die-in” this past Wednesday, lying on the floor of Harvard’s Tosteson Medical Education Center on Longwood Avenue in Boston for 15½ minutes. 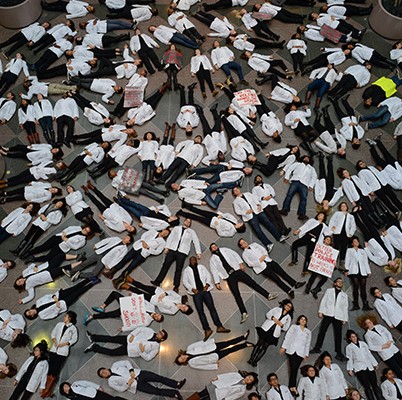 As courtesy of Rick Gloreau

As protests have continued to percolate nationally in the wake of decisions by grand juries in Missouri and New York not to indict police officers in the deaths of two unarmed black men, hundreds of members of the Harvard community have expressed their own frustration and desire for change during a range of demonstrations and discussions both on campus and off.

Hundreds of protesters, including many from the Harvard community, took to the streets Friday night, briefly stopping traffic in Harvard Square and then marching down Memorial Drive to Central Square before returning. The demonstration resembled weekend protests in other cities where thousands also marched.

In recent days, many from the Harvard community have attended protests, marches, vigils, and “die-ins,” in which participants lie down in a show of solidarity and dissent against violence toward black men. Many community members engaged in informal campus conversations and listening sessions organized by deans and administrators of Harvard’s graduate schools. Some students penned open letters and op-eds calling for action.

“Our students are no different than many people across this country who feel, with these recent decisions or nondecisions, that injustice has overplayed its hand,” said Jonathan Walton, Plummer Professor of Christian Morals and Pusey Minister in the Memorial Church, who took part in campus protests and helped organize a student-led “die-in” on the church steps a week ago.

“Black lives matter,” Harvard President Drew Faust said, echoing ongoing concern across the University. “It has taken far too long to make that fundamental truth a living, essential part of the fabric of our society, our government, and our lives. Martin Luther King Jr. made clear a half century ago why we can’t wait. What was urgent then is imperative now.”

“Nearly 50 years ago, I watched on a grainy black-and-white television as the heads and bodies of John Lewis and dozens more protesters were bloodied as they peacefully marched to secure the right to vote. I, and thousands of other Americans, could not remain silent,” she recalled. “I skipped my freshman college midterms and drove from Pennsylvania to Selma, Alabama, to bear witness, to affirm with my presence something essential about who I was and about what I wanted our nation to be. It seemed to me an inescapable necessity. John Lewis might have called it making ‘necessary trouble.’

“Now, a half century later, individuals from across Harvard and across the nation have embraced a similar imperative to refuse silence, to reject injustice, to demand something better from ourselves and our nation,” she said. “I mourn that this is still necessary, that injustice still thrives so many years after we hoped we could at last overcome the troubled legacy of race in America. But I also celebrate how in recent days our community has demonstrated its commitment in both words and deeds to eradicating every pernicious form of racism and discrimination. ‘What will you do?’ Rev. Jonathan Walton asked in Memorial Church last Sunday. We will speak out against injustice; we will join together to insist that things must change.”

The public reactions to the grand jury rulings in Missouri and New York have had a ripple effect at Harvard. On Dec. 1, students joined a protest with others from Cambridge Rindge and Latin School, briefly stopping traffic in Harvard Square. Two days later, a student-organized protest unfolded in front of the John Harvard Statue. Approximately 200 people took part in the demonstration, which included comments from Harvard faculty and a “die-in.”

“A big point of the protest was to get people to interact with this issue who maybe have the privilege to ignore it because it doesn’t directly affect their lives,” said a rally organizer, Fadhal Moore ’15, who is a member of the Black Community Leaders, an umbrella group for undergraduate black organizations.

The oldest of five who said he often thinks about his siblings, worrying that they could be killed by police someday, Moore called the campus reaction hopeful. “At the end of the day,” he said, “it has been very, very encouraging to see all these people come together.”

Demonstrations and forums have touched most of the University in recent days.Harvard Law School (HLS) Dean Martha Minow, who wrote a column for theBoston Globe last Tuesday calling for reforms to the nation’s criminal justice system, invited members of the HLS community to a conversation with her and faculty members the following day to discuss the issues and “to think together about how we might move forward and contribute to the effort,” she said in an email announcing the session.

At Harvard Business School, about 500 people gathered in Burden Hall to remember Michael Brown and Eric Garner and raise awareness about racial profiling.

“Many in our College community are in pain and struggling right now, and no matter our understanding of the issue, we must come together to comfort and support each other,” wrote Khurana in an email titled “Standing Together” that announced the event.

The hourlong discussion touched on many of the challenges surrounding frank conversations about race. Several attendees wondered how to be better allies to the African-American community. Others responded that being an effective ally means being willing to take risks and getting comfortable with uncomfortable conversations. Some called for greater support from the administration. Administrators in the room answered with pledges to renew commitments to connecting with minorities and allies across campus.

“I appreciate what you said, that we have to do better,” said Khurana, “and we have to be willing to take risks, and that also means, I guess, a little more forgiveness on the other end.”

Following the talk, Sarah Cole, a senior and president of the Harvard Black Students Association, said she felt encouraged.

“I think it’s important for this campus as a whole to acknowledge what has happened, to acknowledge how it has affected people, both internally and externally. And so it’s really powerful to see our administrators and our students and our faculty coming together in this space to actually do that.”

Sophomore and Mather House resident Olivia Castor said she was also heartened to see members of the faculty and the administration taking part. “I know at several other schools throughout the country, students don’t have the support of their faculty and administrators, and to see that here we do, it’s just really amazing and it’s really reaffirming.”

The Harvard Graduate School of Education (HGSE) held an earlier open dialogue for students, organized by the school’s student council and office of student affairs. The session was attended by Dean James E. Ryan and came the day after the grand jury decided not to indict Darren Wilson, the white police officer who fatally shot Brown in August. The HGSE’s dean’s office also created a fellowship fund for students interested in doing social justice work in Missouri or in Greater Boston in January. Last Tuesday, students also led a “die-in” in the Gutman Library.

In addition to supporting and helping to organize recent protests and marches,Harvard Divinity School (HDS) students, with help from Walton, traveled to Ferguson, Mo., in August to support local organizations and protesters. Students from HLS have also gone to Ferguson in recent months to offer support and act as legal observers.

HLS students have also organized protests and events. McKenzie Morris, president of the Harvard Black Law Students Association, said her organization has been “active on this point since the Mike Brown death in August.” In October, the group organized a conference with members of the Boston and Cambridge communities, including representatives of each city’s police departments, to discuss issues such as the accountability of law enforcement. The group co-hosted a campus talk about race with the School’s American Constitution Society and recently sent an open letter to President Obama and Attorney General Eric Holder with more than 1,000 signatures that included a call for legislation requiring police to wear body cameras.

Across campus, many students said they have taken comfort in the ability to simply share their grief and frustration with others from the community.

After the Ferguson decision, HDS students held a gathering in one of the School’s small chapels. People sat in silence, sang, cried out, spoke, testified, prayed, “whatever their hearts led them to do,” recalled HDS student Melissa Bartholomew. “Because I have spaces like that — and a community to connect with, and a community that is diverse and crosses all faiths lines, and gender lines, and economic lines, and racial lines — to be in the midst of spaces like that is so healing and encouraging and affirming for me as an African-American woman going through these experiences. I’ve been really grateful for each opportunity that we’ve had to gather as a community.”

During his Sunday sermon a week ago, Walton told listeners: “For those who think that this is overblown, until one feels the dehumanizing blow of being of the wrong race in the wrong space, and thus always and already guilty upon arrival, one should refrain from all the sanctimonious bromides about guilt, innocence, or simply following the law.”

Just before the service ended, Walton made his way outside to the church steps, where he urged protesters, many of them students, to start “thinking about your careers in such a way that you can help dislodge, you can help dislodge our criminal system from the bitter hands of corruption.” The group then took part in a “die-in,” causing members of the congregation to step over them as they exited the church.

“Martin Luther King Jr. once said that desegregation is about physical proximity, but integration is about spiritual affinity, and so really it’s about the human connection. And so one of the things that I wanted to do was to bring students together with the worshiping community on Sunday,” said Walton later in the week.

Castor, who also helped organize the Memorial Church session, said the goal was to get those who don’t think the issue affects them to see things differently.

“It interrupted daily life because it forced you to take another path. It forced you to go somewhere where you wouldn’t have gone before … that’s why I thought it was very, very powerful, and very important.”

Faust said she hoped that meaningful, lasting change comes out of the current protests and discussions.

“I hope that in the half century to come, our remarkable students will also commit to use their lives and their education — in law, in medicine, in education, in public health, in politics, in the arts, and in so many other fields — in service of the freedom, dignity, and equality they have called for this week. At this University, we have a special responsibility to speak and live the truth. This challenges us to use our voices and our actions to help build a world in which we work to make our values real, a world in which differences are not sources of oppression and divisiveness, but of strength and community, a world of justice for all.”