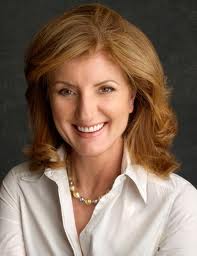 Reformed workaholic Arianna Huffington on Wednesday urged a Harvard audience to unplug, get some sleep, and give to others, all as a way to get more out of life.

Huffington, the president and editor in chief of the Huffington Post Media Group, said it took her own 2007 collapse — and breaking her cheek on the edge of her desk as she fell — to interrupt her always-on lifestyle. It was during her recovery that she began to think about how she ran her life and the broader topic of how society defines success.

“I know by the conventional definition I was successful, but by any sane definition of success, if you’re lying in a pool of blood, you’re not,” Huffington said. “We discovered there was nothing wrong with me medically, but just about everything wrong with the way I was living my life.”

In her subsequent exploration, Huffington found research — some of it conducted at Harvard — on the importance of sleep to health and creativity. Sleep deprivation robs one of the energy that makes working hours productive, and energy, not time, is the most important factor in tasks and personal interactions, she came to realize.

“Sleep is like a miracle drug,” Huffington said. “If you look at all the things that it does, it looks like the label you’d find on snake oil of the 19th century, except it’s actually for real.”

Huffington’s is not the first generation to value hard work over sleep and family time, she pointed out, but it is the first to be living during a “perfect storm in public health,” when there’s increasing evidence of harm in the go-go-go lifestyle.

The period of introspection that followed Huffington’s collapse also led to a book,

“Thrive: The Third Metric to Redefining Success and Creating a Life of Well-Being, Wisdom, and Wonder.” She discussed it with an audience of about 175 during a session of TheForum at Harvard School of Public Health (HSPS) held in the School’s Kresge Building.

After introductory remarks from HSPH Dean Julio Frenk and Harvard President Drew Faust, Huffington was interviewed by Jay Winsten, the Frank Stanton Director of the School’s Center for Health Communication and associate dean for public and community affairs.

Huffington said she sees slow but steady changes in the ways we run our lives. More awareness of the importance of rest and balance has helped, she said, as have declarations by some business leaders that they consider time to recharge crucial to their success, and the fact that a significant number of companies have wellness or stress-relief programs.

Though sleep is critical to Huffington’s “Third Metric” of success — the first two are money and power — it is not the sole factor. Unplugging from technology is important, as is taking waking time for things such as contemplation or meditation, exercise, activities with family, and giving to others, which research has suggested can boost feelings of well being, Huffington said.

Think of cellphones, she added, whose batteries we monitor regularly so we can power them up before they die.

“That’s not how we treat ourselves. We have to be below zero battery remaining, crashing and burning, before we pay any attention.”