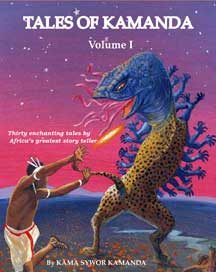 Call for illustration of african tales.

Tales of Kamanda Vol. 1 by Kama Sywor Kamanda; 41 enchanting tales by Africa’s greatest story teller, preface by Léopold Sédar Senghor
Kama Sywor Kamanda has produced a dozen anthologies of poetry, several hundred stories, four novels and three plays. The imagery in his stories comes from African traditions but mixes the fantastic and the real, conjuring up memorable pictures of sunlight, dark forests, beautiful princess and fearful monsters. Born in the Congo, he published his first collection of stories in 1967 when he was 15. He helped create the Union of Congolese Writers but fled Mobutu’s Congo in 1977. He was the founding president of the African Association of Writers of which Léopold Sédar Senghor was the honorary president.
His works have been translated into many languages and he has earned many prizes, including the Black Africa Grand Prize for Literature, the Paul Verlaine Prize and the Théophile Gautier prize from the Académie française. In 2005, the International Council for Francophone Studies conferred upon him the prestigious Maurice-Cagnon Certificate of Honour, for his unique contribution to world literature in French.
BOOKS OF AFRICA is also publishing children’s editions of two of his stories, “Amana, the child who was a god” and “Prince Muntu”. Published in collaboration with Editions DAGAN, Paris.