Robert de Niro and Al Pacino are already proclaimed Albanians. It’s true that there is a big community of Albanians in central and southern Italy and on the island of Sicily, called Arbëresh. They are a long-established Albanian ethnic minority, protected in Italy. However proclaiming all those célébrités as Arbëresh without substantial evidence seems “too much”! Monica Bellucci, Robert de Niro and Al Pacino are known as Italian. If they were Arbëresh they would have already talked about their origins – if it would be the case! What is the point of proclaiming loudly and clearly that these personalities are Albanians, if they do not speak about it themselves or worse, if they deny it? 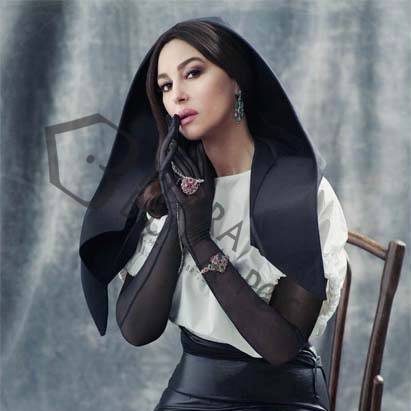 I have read some articles about the so-called Albanian origins of the famous Italian actress Monica (Anna Maria) Bellucci. M. Martin Henze ( see twitter attached) also considers her Arbereshe**, the site Dua.com and the journal online newsoholic which can be a fantom media (no ‘about us page’ in the site), proclaims that the name Bellucci is a variation of the Albanian family name Belushi* from Korça. Others also draw a parallel between her name and the name of the American actor of Arbereshe origin Jim Belushi.

Others said: “that his father Pasquale Bellucci is of Arberesh descent…”

In an Albanian TV show, Attilio Bellucci (who introduced himself as her cousin) declared that Monica’s father, Pasquale Bellucci, is of Arberesh origin! Is this a proof? We do not know that Attilio Bellucci is really Monica Bellucci’s cousin. There are a lot of people who have this family name.

“Bellucci was born 30 September 1964 in Città di Castello, Umbria, Italy, as the only child of Brunella Briganti and Pasquale Bellucci, and grew up in Lama of San Giustino. There are claims that her father’s last name Bellucci may come from Belushi, an Albanian last name from Korça in Albania as outlined by her cousin Attilio Bellucci, though Bellucci has neither confirmed nor denied such claims.”

This last was cited also by the twitter the cite Dua.com : “It is about more or less at the time of Skanderbeg (1470) where some Arbereshe family emigrated to Italy because of Ottoman invasion and from there we have originated.” – Attilio Bellucci

Monica, she talks about her European and Italian identity: “I remain Italian” she said in the interviews book: “Rencontres Clandestines” a collaboration with: Guillaume Sbalchiero. Bellucci talks about “her” baggage as the beauty of Italy and its contradictions: the pasta, the cinema, the macho man, the muzzled woman, the padre/padrone concept, the sensuality, and the sin…”

“I have never lived in Hollywood. And I remain deeply attached to my European identity. I would not have liked my daughters to be able to speak English without mastering French and Italian. I move around a lot, and no matter where I am on the globe, I remain Italian.”

The specificity of the Arbëresh (descendant of Albanians) is linked with the fact that after leaving Albania in the 15th century they stayed together and kept their traditions; the others who left their Arbëresh villages and lived for centuries in Rome or elsewhere in Italy are now assimilated and are metaphorically speaking very far from the tree. So having a distant link with an Albanian descendant (a probability, which she has neither confirmed nor denied) would not be enough to proclame Monica Bellucci Arbëresh, so as a descendant of Albanian nation!

I wanted to share with you the envie to relativize and to be able to laugh with this tendency of the sympathizers of Albania to proclaim any world personality as being Albanian.

However proclaiming all those célébrités as Arbëresh without substantial evidence seems “too much”! Monica Bellucci, Robert de Niro and Al Pacino are known as Italian. If they were Arbëresh they would have already talked about their origins – if it would be the case!

Somebody thinks that appropriating all these personalities from the world of art or science would make us more valuable, more European in the eyes of the world. Even if all these celebrities were Albanian, this shows strictly nothing! All these personalities of art or science have been raised and educated in schools and cultures foreign to the Albanian one. At best they are hybrids! And this does not change the fact that we are still unable to build a state of law and we continue to leave our lands by thousands and this for hundreds of years.

Robert de Niro and Al Pacino have already been proclaimed Albanians anyone who comes from far or near southern Italy is proclaimed Albanian. There have indeed been always migratory movements and the populations are mixed, but to proclaim everybody Albanian is a bit “too much”! So let Monica Bellucci, Robert de Niro, and Al Pacino the right to tell their origin… with the integrity they have always demonstrated – they would have already talked about their Albanians origins – if it would be the case!

On the other hand, the book “Rencontres Clandestines”, (Clandestine Encounters, Monica Bellucci) by Guillaume Sbalchiero, l’Archipel publishing is interesting and Monica Bellucci, as always philosophical all the opposite of the created image of other actresses for example “Merilin Monroe”.

I leave you, the only judge to find out whether these facts are real or just quick publications that are the result of the sympathy towards Albanians of Mr. Henze or Duadotcom meeting site…but I am afraid that the lack of foundations unfortunately can turn those publications into speculations.

Micky Haxhiislami, a passionate of Albanian history and photography said: “I understand and I agree with your point of view. The best would be if Monica Bellucci, Robert De Niro & Al Pacino talk more in depth about their origins, however same time I believe the Academy of Science of Albania and Kosova, should create special departments to deal with all these kind of cases. It’s important to know the real truth and stop dealing with coffee talks.”

Following our investigation seriously, we asked the editor in chief of “Jeta Arbëreshe” about the origine of Monica Bellucci. Agostino Giordano answered:” (… )I don’t know if Monica [Bellucci ] is an Arbëreshe or not. I have no information about her origin.”

Albanian or not, Monica Bellucci is an actress and woman very much loved for her art and dignity. It is not important what is her origin.

This article is about the importance of verifications of facts before publishing them, because otherwise, even when there are good intentions, there will be disinformation!

"It is about more or less at the time of Skanderbeg (1470) where some arbereshe family emigrated to Italy because of Ottoman invasion and from there we have originated." – Attilio Bellucci pic.twitter.com/sHdcQo225e

An actor I admire,Robert De Niro,born in Manhattan,his father, is one of the leading abstract expressionist painters in the USA.He was friends with writers Miller,Williams.Mother was a famous painter, both grew up in Sicily, are Sicilian arbäresh,Albanians you are a great nation. pic.twitter.com/05UP7g9W2b

Another Albanian I admire very much, Alfonso Pacino. Al Pacino, born in Manhattan, is the son of Salvatore Pacino,born in the Sicilian city of Corleone,an Arbëresh.
Family is originally from Kruja,one of the great us film actors, theatre’s,director,producer,My respect, Albania. pic.twitter.com/YyTPXdJwxT

*Belushi is an Albanian surname. Notable people with the surname include:

** The invasion of the Balkans by the Ottoman Turks in the 15th century, after the fall of Scanderbeg, forced many Albanians to emigrate from Albanians land (actual Albania, Kosovo and Northern Macedonia) to southern Italy. They are called Arbëreshë. There were several waves of migration. Arbëresh are a long-established Albanian ethnic minority in central and southern Italy, on the island of Sicily, protected in Italy by law no.482 “On the protection of historical linguistic minorities”of 15.12.1999. They are part of the AL Nation.